Isabela Hiti, her birth name is Isabelle Forestier . I was born in Bastia in May 1968.

In 2016, she decided to take an artist name in reference to Tahiti where she has lived during her childood. In tahitian “Hiti” means “light” wich correspond to her research.

She has travelled all arround the world :  in Madagascar, Tahiti, Deutschland, Centrafrican republic.

This travels gave her the love of colors.

After studies in Institut Supérieur du Commerce in Paris, a business school, she decided to learn all the classical technics of drawing and painting through different schools and “les ateliers de beaux Arts de la ville de Paris ” where she has studied during 15 years. In 2010 she decided to teach drawing and painting and helping people to expresss themselves through art , her workshop art is called ” Atelier d’art Croqueurs de Vie”.

She has exposed in Paris and in different countries such as Italy and French Polynesia. She has been seen by the studio of the emission ” Thé ou Café” and has decorated twice this emission in 2012 and 2014. She is above all a colorist, artist of colors and positiv emotions. She works with hospitals to make the environment better 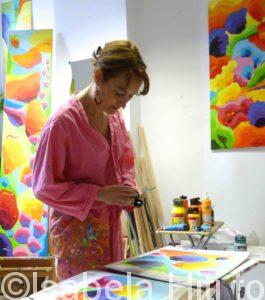 “Throughout my childhood, it was in the observation of nature that I found the path to liberation: transforming suffering in beauty. Finding in the study of life the power to go beyond what was dead. My aim is to convey the energy and strength that I find in the nature. I abandon myself to this nature by seeking to capture its essence by constant and meticulous observation.

I sketch tirelessly in the squares, the parks, on the roadside, in front of the sea. I go through my memories to bring back turquoise blues of Polynesia, the bright colors of tropical flowers, African laterite. I then let this flow invade me to rebuild the large structures, the key elements and the detail of the painting. The result connects to emotions, “your painting is a medicine”, “your painting gives me strength”, ” I had a cancer and in your painting I regain the momentum of life felt after my remission “. To share the path to happiness to get out of suffering: that’s what I bring. “